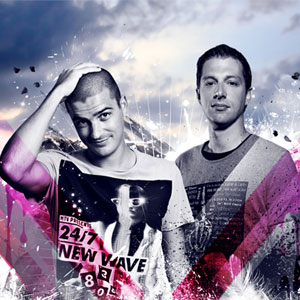 Fresh from various banger releases on their own on Hotfingers, Spinnin, Cr2, Big love… with prestigious DJ residencies on their own in Paris, Casablanca and Shanghai, French duo Romain Curtis and Paul Cayrol joined their force in 2010 with a first Hit, ‘Estrella’, released on English Label Cr2 Records, topping the beatport charts, and supported from some of best Dj’s around the world .The Duo Hits back in 2011 with ‘Santiago’, released on American Legendary Label ‘Strictly Rhythm’.
In 2013, they decide to produce together under the band name SLIDEBACK. Their first track, ‘Strum it’ is signed by one of the house music label leader : ‘Hotfingers Rec’ and stayed 3 months in the Top 100 Beatport Sales ! They Followed up with a new banger track on Pornostar Records, ‘Summerize’, hitting Beatport Top 15, and a remix for Norman Doray on ‘Levels’, Superstar DJ Avicii’s label !
Next Release will be a new track on Hotfingers for the fall, and a remix for House Duo Star : Crazibiza !