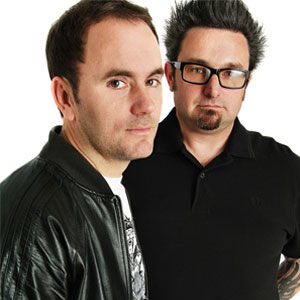 There are a few artists that are synonymous with the term ‘House Music’, those acts that have become so ingrained in the conception of the sound that the simple resonance of their name brings a vibe to mind. Gary Dedman and Kevin Andrews created such a pseudonym when they joined forces to create the “Hoxton Whores”.Following an unplanned conception, the Hoxton Whores quickly became a much-loved feature on the dance music circuit. Initially coming together to write and produce music, their lovechild soon morphed into an extremely successful partnership that continues to rock dance floors all over the world to this day. As artists they are signed to some of the most prestigious house labels in the scene. In the last 12 months alone the list includes: Ministry of Sound, Great Stuff, Toolroom, Subliminal, Stealth, Deeperfect, Hotfingers and Suara who have all snapped up originals and remixes from this talented partnership. These tracks have also gone on to feature on countless compilation albums that have sold thousands upon thousands in territories all over the globe. The Hoxton Whores collaborations with other titanic musicians like Deep Dish, Paul Johnson, Blue Boy, Double Exposure, Robbie Rivera and many more have showcased their immense diversity and ability to inject a unique Hoxton Whore flavour to even the biggest and boldest releases, nothing is daunting and everything is an relished challenge. Their label, Whore House Recordings, was launched in 2007 to allow them to expand their discography, explore more avenues within House music and to present their army of followers with even more tantalising productions that have rocketed up the charts. With nearing 100 releases under their belts, #1s on Beatport, Trackidown and DJDownload, rave reviews in the media, huge support from the heavyweights within the music business and artists jumping at the chance to stand up for remix duties, we think it’s safe to say Whore House Recordings has weighted itself as a cornerstone in House. When it comes to touring it would be easier to name where they haven’t played but we’ll list some of the most prestigious. Glastonbury – one of the biggest festivals in the world, done. H20 Festival in South Africa, ticked off. MTV Dance Festival, Groove Garden in Holland, Colours Festival, touring Brazil, Australia, China, America, Africa, Russia, all through Europe including holding residencies in the legendary party island itself; Ibiza. They’ve done it all. An envious diary of the biggest, best and most infamous parties in the world have called upon the Hoxton Whores to deliver what they know best – Chunky, Groovy, Beat Laden, Vocal Dusted, Proper House Music.With House music coursing through their veins it was always inevitable that they launched their own night. In 2004 Whore House hit the circuit to a fanfare welcome and has continued to pull in the crowds year on year, whatever country to has decided to call home, they’ve packed out venues! Seasons in Ibiza, a London residency and with their latest Chelmsford residency already this year having welcomed the likes of D.Ramirez, Prok & Fitch and BBC Radio 1’s Danny Howard to all rock the dance floor plus countless tour nights across the world. How do you sum up an act like the Hoxton Whores? We could continue to mention their impressed list of global hits like ‘Friday Saturday Love’ on Ministry of Sound, ‘Hoxtons vs Cream’ on Universal, we could waffle on about the intensity of a Whore House night with it’s Burlesque theme and hedonistic heat or maybe we could reel off more colossal artists that have called on their remix skills like Danny Howels, David Morales and K-Klass.