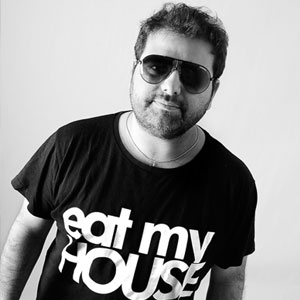 Gabriel Rocha also known as DJPP, with over 18 years experience, is one of the best DJs and Producers of Uruguay. Also in the words of acclaimed Mark Knight is one of the most important DJ / Producers of 2010. In 2011 he was nominated as best producer in the Beatport Tech House Music Awards for her track Drunken Russian. In 2012 in all his TOP 10 La Luna DJPP Original Mix was the most outstanding for months.Gabriel is constantly in the Beatport top sales with productions in the most important record labels including Toolroom, Defected, Rising, Leftroom, Sci + Tec, StrictlyRythm, Cr2, PPmusic, Greatstuff, KlingKlong, CraftMusic, Ministry of Sound, Ultra Records, Soulman and MuzikXPress. In his career as resident DJ has worked on some of the best clubs in Uruguay, including Punta del Este SOHO, W. Lounge in Montevideo, IN, Sonic, Central, Crobar in Punta del Este during the summer months, among others.
In addition to their residence has performed at many festivals around the world, like Creamfields in Buenos Aires, Soul Tech in Mexico, Qubo Festival in Poland, Matuquin Festival in Spain, Australia Big City Nights, FW Festival in Brazil, among others.And has also played in the best clubs in the world, for example Space Ibiza, Pacha Munich, Ministry Of Sound, Sankyes Ibiza, Crobar Buenos Aires, D.EDGE Brazil, The End Colombia, Revolver Melbourne Australia, Provocateur New York, Port du Soleil Sweden, Exit Summer Residence Lithuania, Hungary Monster Beach, Carpe Diem Beach Croatia, Spain Disco On, Get Party New Zealand, among others. Gabriel began as a producer in 2006 and has produced remixes for Mark Knight, Funkagenda, Chris Lake, Deadmau5, Queen, Thomas Gold, Lee Cabrera, Soul Central, Chus & Ceballos, Jerry Ropero, Boy George, among others.
Gabriel’s musical style is the result of many years of hard work and great experience to dominate the dance floor, with a unique and incomparable style.